I wanted to take a moment to talk about our recent launch, and where we're going to go from here with Launcher updates.  As some of you are are aware, our new launcher has a much larger file size than the old one.  In fact, the current public build is more than 10 times the size of the old launcher.  Some have suggested that the new interface design is responsible, but the culprit is actually our new multi-lingual support.  18 out of 20 Mb of the current Launcher file size is the three fonts that currently ship with the launcher.  They are 6Mb each because of the universal language support they include.

Multi-lingual support is really important to us, but the status quo cannot continue: you're tired of the launcher taking so long to update, our network gets saturated on the weekends from people updating the launcher, which makes it harder for you to update your launcher and install our official modpacks.  Nobody appreciates these problems, so let's talk about what we're doing to fix it:

Last night, I promoted build #216 to Beta.  If you're interested in using the Beta stream, we'd really appreciate it if you joined us in #technic so that we can discuss your thoughts about the current build.  It's also a good place to get help for any other issues you might be encountering.

In addition to the byte-patching update system, over the next weeks and months, we have a lot of great stuff coming to the launcher that we think you'll be pretty excited about.  We can't talk about all of it yet, but here are a few highly-sought-after features that are currently in development:

And these only cover new launcher features!  We'll continue to keep you up to date on these developments as they get worked on.  Thanks for playing Technic!

A new update was pushed last night with several improvements and optimizations to make your experience on the Platform a better one.

- NEW: Modpacks using Solder will now show a mod list
- FIXED: Help/Permissions pages now correctly show up when they have content
- FIXED: Modpacks using Solder will now show the proper modpack version and minecraft version in their pages header
- FIXED: Minecraft avatars will now show up properly in the launcher for feed items
- FIXED: Changed OSX link on downloads page to use the .jar download
- FIXED: Linking a new modpack to Solder that hasn't been imported has been fixed and will now link and unlink properly
- FIXED: Users modpack limit no longer counts soft deleted modpacks
- FIXED: Comment replies now show their own reply time instead of their parents reply time

Along with the above changes we have also made several optimizations across the board as well as re-enabled personal dashboards. They should load much faster now!

How To Install Packs

We hope that you're enjoying the new launcher and platform, but some users have been a bit confused about how to install packs now.  There's no big "Add A Pack" button in the launcher, and that's causing some confusion.  Over the next couple days, we'll be improving the way the launcher directs you to install new packs, but in the meantime, here are the three ways that you can install a modpack on the Technic Launcher.

The search bar on the left side of the launcher can be used to find the packs your heart desires.  Just put a single term and the best packs of the platform that match will be brought to your launcher.  Don't see what you want?  Click the "Find more" link at the bottom to see more results, and use the second installation method. 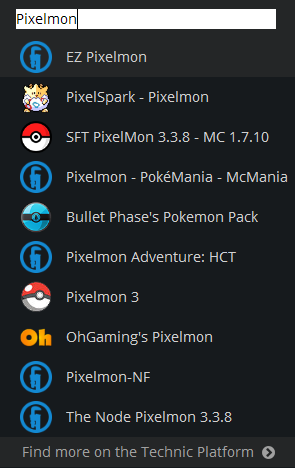 Install From the Platform

Are you already at the Platform page for the pack you want?  With your launcher open, click "Install This Modpack".  It will be added to your Launcher!  It's magic. 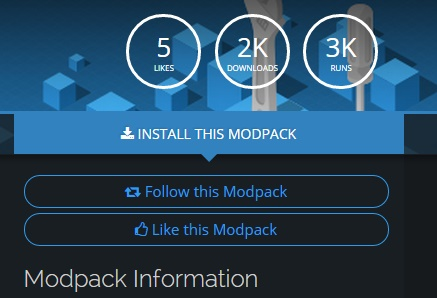 Or, If All Else Fails

Just about anything can be put into the search bar, and the launcher will do its absolute best to turn that into an installed pack.  Got a Platform API link?  That'll work.  Almost anything will work, and we hope you'll use this advice to try out lots of packs you haven't seen before.  Have you seen Trending Modpacks?  You can see it by selecting Browse Modpacks from the Discover menu at the top of the Platform, and it's a great way to discover cool packs you haven't heard of before.  It changes all the time!

So enjoy the new Platform and give the new launcher a spin.

The Technic Launcher v4.205 is now promoted to stable, and you will download it the next time you run your launcher locally.  This version of the launcher includes a fix to ensure that only the Technic Platform version of pack art is used.  Previously, there was a bug which caused Solder icons to be used where available, and in some rare cases, other Solder-hosted art assets would be used as well.  This completes an arc of changes that began a couple days ago, in which we've moved to only using Platform-hosted art assets for all Technic packs, for both the website and the launcher.  If you are a pack author who uses Solder, this should reduce your hosting bills somewhat, as well as make the process of developing art assets for your Platform pack more straightforward.  If you have a Solder server, we recommend that you continue to host art assets on it, for the benefit of other launchers with Solder support, such as MultiMC.

If you are a pack author who is hosting your pack on Solder, we highly recommend that you develop and upload pack art in the new dimensions to the Platform ASAP.  Packs with art not only look better and get more attention, they're also eligible to be selected by our algorithm to appear in the "trending packs" list in the Technic Launcher.  Being on this list can bring literally thousands of potential users to your landing page, so it's a pretty big deal!

As you no doubt notice, several changes have gone live in the four days since Technic Launcher v4 was first available.  Chiefly, these changes have consisted of caching improvements to reduce load on our website and everyone's Solder.  Some improvements have also been made to the way the launcher reacts when certain web services are unavailable.  Lastly, we snuck in a single fix to the way the launcher downloads assets for older versions of Minecraft, which should fix an issue in which some users were not hearing sounds in older packs.

We hope you enjoy the new Platform, and we'll continue to keep you up to date about improvements to the site and the Launcher.  We're still working to improve performance on the website, which today will include some major upgrades to our server hardware, so hang tight!

This update fixes a multitude of issues: