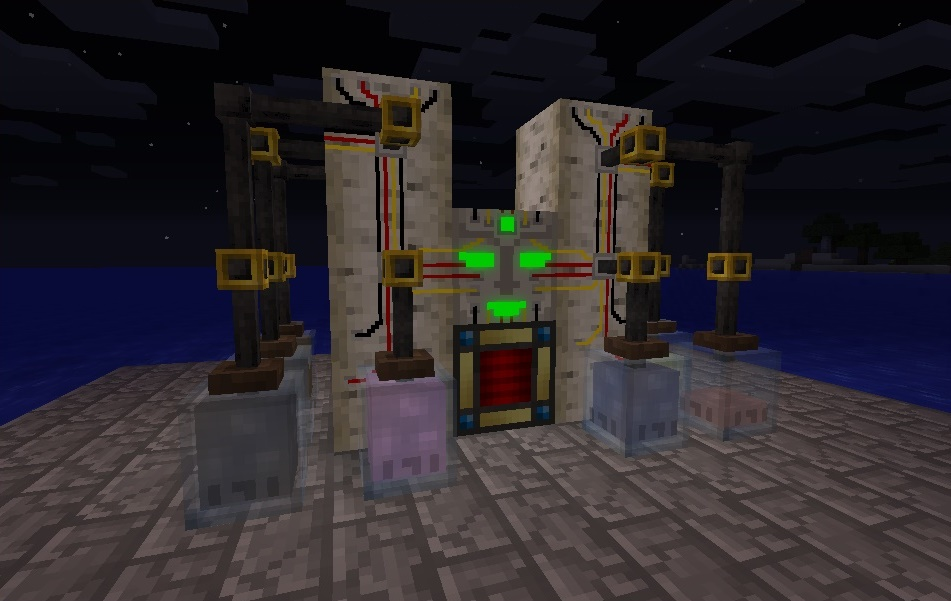 This week, we made a couple minor changes to the platform that will be important for new pack releases.  First, we re-added the ability to have teaser pages, which are always a big hit, and are once again hosting the old teaser pages for existing packs.  The second thing we did is a follow-up to a change we made a couple months ago.  In March, we removed some older packs from the list of default packs in the launcher.  However, those packs' pages still said "Included in the Technic Launcher"!  You could still search for these packs from the launcher, but it was frustrating if you were trying to install Tekkit Classic on a new launcher.  All official packs that are not included with the launcher now have a Platform API Link on their Platform page.

Additionally, this week we will be reinstating stats in the launcher.  The path to get us there has been a long journey from sct but we're just about ready to unveil that, so look forward to it!

A Word About Hack Slash Mine

This week, we removed Hack Slash Mine as an official Technic pack and we wanted to drop a quick word about that.  We really like HSM and have been playing it for years, so it's not a decision we came to lightly.  Unfortunately, recent Java updates have broken Hack Slash Mine and Frizzil has not been reachable.  Frizzil is now a professional game developer who's worked on some really impressive titles, and doesn't usually have time to work on HSM.  As a result, we understand why it hasn't been updated, but unfortunately, we can't endorse the pack now as we could a few months ago.  We also have no means to fix the problem ourselves.

Users can get it running by installing Java 6 or Java 7 and selecting that java version from Launcher Options, so it is runnable.  We are not going to remove it from the Platform as we do with other packs that aren't Java 8 compatible, and we will continue to host and maintain the pack the best we can.  However, it will no longer automatically appear at the top of relevant search results and will no longer appear in the official modpacks list on the Platform.  We apologize to fans of the pack and hope that Hack Slash Mine will return again someday.

That's Pretty Much It!

It was a quiet week, but a lot is going on just under the surface- you'll see soon!  Come visit us on IRC, our forums, or reddit, and tell us what you'd like to see!

You must be logged in to comment. Click here to register a new account or log in.
my modpack is no longer working i put the legacy java fixer in but it did nothing i really need help on fixing the problem
Reply

Nentify 7 years ago
why no love for tekkitlite. ಥ_ಥ
Reply

regulinecolt009 7 years ago
Tekkit Lite has always been my favotie pack out of the tekkit trio, i'd love to see some support for the pack. the fact that it has the main machinary mods, along side the simplicity and not much of the complicated side-mods that aim for a far-destined goal. the pack is close to dead sadly
Posted by _Venema_ 7 years ago
When frizzil is done updating H/M to 1.7.10 then open sourcing it, will it be supported on the pack and be featured again? you are right on him working on HSM but not having enough time for it :P http://www.minecraftforum.net/forums/mapping-and-modding/minecraft-mods/wip-mods/1438939-1-2-3-hack-slash-mine-streaming-updates-every?page=183
Reply

animal lover101 7 years ago
If you want Shaders Mod in AOTB, then you can add it yourself.
Posted by SomeWeirdo 7 years ago
Hey
Reply

animal lover101 7 years ago
When is tekkit classic going to get an update to the current java 8?
Reply

Nobody369 7 years ago
I believe Tekkit Classic is no longer maintained. Don't quote me on this though.
Posted by SomeWeirdo 7 years ago
This is also a bit strange because this was posted on a Thursday, not a Tuesday. :P
Reply

OdieII 7 years ago
does technic launcher work on vista
Reply

paultroum 7 years ago
i really like HSM but i am glad you took it off as an official modpack. i tried to get it to work and i couldn't so i'm glad i know why it wouldn't work now lol..
Reply

shadowdarklord6 7 years ago
i really like HSM but i am glad you took it off as an official modpack. i tried to get it to work and i couldn't so i'm glad i know why it wouldn't work now lol..
Reply

aquakillz 7 years ago
please help i made modpack but i need public folder in dropbox help how i can make it work? people cant download it
Reply

master jones 7 years ago
What is this image? Looks like a totem of dawn, but whats going on with it?
Reply

missingno3567 7 years ago
It looks like a redstone energy cell from thermal expansion, some essentia jars and tubes from thaumcraft and somekind of wired silverwood
Posted by whitepyros 7 years ago
me stupid I it the iron golem but finaly he ws nice guy :(
Reply

kinnydawn 7 years ago
You can do all this which is great progress and all, but you don't update the good packs you have such as Attack Of The B-team which is still very fun.... and could be better if you guys put more into it ;-;
Reply

!egg 7 years ago
its been six days where is the new pack ?
Reply

Henjack5925 7 years ago
What is that big Thaumcraft/Thermal Expansion robot thing? I want to build it!
Reply

Explosion121 7 years ago
well i asked that too, it looks a bit like a totem of down from Blightfall, but a bit "overclocked"
Posted by missingno3567 7 years ago
Can anyone tell me how to make a mod pack? I got the title and description part down and that's about it.
Reply

ExoticSquirrel 7 years ago
"[B#308] File version.json not found" I keep getting this error everytime I try and load any modpacks.
Reply

TheWildMongoose 7 years ago
wait, does this mean there coming out with a new pack to replace HSM or just a new pack I general or no new pack at all? I would really love a new pack as long as it is lower than 1.7.3 as I cannot get that version or higher :( my pc just will not allow me to get open gl 2.1 :(
Reply

AtoZgamer 7 years ago
i mite love this
Reply