It's been awhile since you've heard from us, but we haven't been idle!  We've been working hard on a lot of fronts to make 2015 the Summer of Technic!  You're going to be hearing from us a lot more often over the next 3 months, but let's round up all the great things we've been up to!

Over the past 6 months, CanVox and Technic's artist, TheHave, have been undertaking the cross-country move necessary to put them in Florida, home of KakerMix and sct.  This has taken up a lot of our time, but we're now closer than ever, and getting more done than we thought possible.  This move has been really stressful, but you're going to start to see some real benefits!

No, he's not yet another Pack Welder.  Zehn is a new Technic guy who's going to help us out with your support questions and also work Modpack reports so we can respond more consistently to problem modpacks, and restore modpacks when they've been fixed.  We know that this has been a problem area for us, so it's Zehn to the rescue!

Are You Ready for New Packs?

This is going to be the summer of brand new 1.7.10 packs for Technic!  We've been working hard on packing, testing, and providing exclusive Technic content for all of our packs!  The first one will be released by the end of June and we think you're going to be pretty impressed.  This summer, you can look forward to a new and improved Official Technic version of Blightfall, Tekkit, and Hexxit.  And by the end of the year, a new, super-secret pack that we can't even talk about!

In the meantime, enjoy these teasers for some of the great new stuff coming in Hexxit II!

A brand new mod allowing magical abilities to be added to the game! 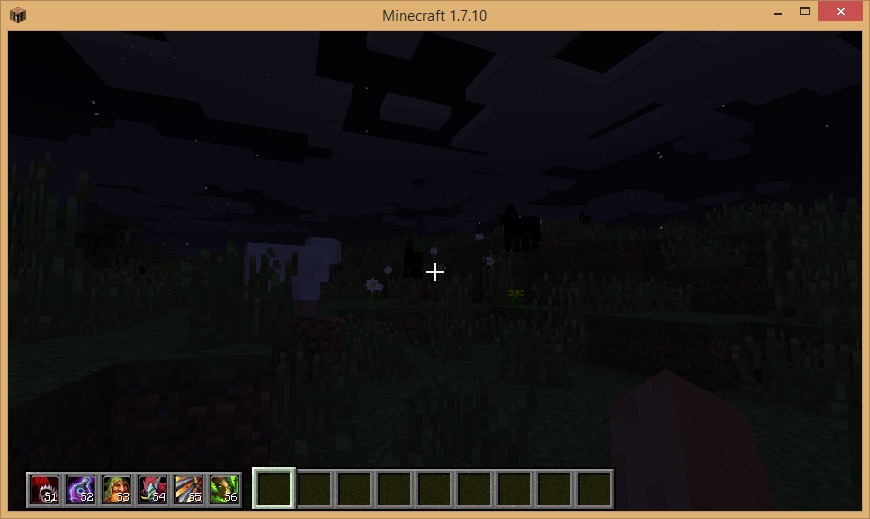 Some important improvements have been made to the Platform lately to really improve the speed and scalability of the website.  You may have noticed that in-launcher stats display and the website's personal Feed have been shut off.  This is a temporary measure- soon, both features will be back up and faster than ever, allowing for great performance on the weekends once again. Let's go over what we've done so far:

First, stats tracking.   Stats have been a major scaling problem with the platform for some months.  We wanted to store the stats in a way that would allow pack authors to produce reporting and see trends.  While the initial data structure supported that, it was too granular, and the database bloomed out of control.

We've fixed this problem for new data and old data is being processed to be less granular.  Unfortunately, the processing is taking much longer than we anticipated.  We're currently working on a solution to allow the website's Redis-based stats display to be used on the API, so that stats display can return to the launcher before the database table is ready to be used.

Secondly, new Solder linkages with the Platform.  It used to be really easy for a badly-configured Solder server, when linked to the Platform, to break your pack's platform page with very little information.  We've fixed this issue, but it's kind of squirrely so please let us know if you're bitten by this in IRC.

Next, database load.  Most site slowness is caused by load on the database from lots of people using the site.  We've re-examined the way we're retrieving certain types of data (mainly, ratings and whether you've +1'd an item you're looking at).  We'll be reorganizing the queries for these over the coming weeks to reduce load and allow us to bring back the dashboard feed and even expand functionality without hurting performance.  If we need to, we're not unable to or opposed to upsizing the database, but we'd like to try optimization first.  Please bear with us while we explore solutions.

Lastly, we had to add a throttle to the launcher API.  We didn't want to, but unfortunately someone chose to execute a DOS attack against us in April that targetted us by fishing for cache misses to place load on the database.  We were only able to defeat the attack by placing an API command limit with a cooldown.  We're very sensitive to legitimate users being bitten by this limit, so please make us aware if it's a problem for you.

We're also tracking an issue with the platform currently where sometimes when a pack owner or contributor saves the pack, it fails to hand off the new data to the API.  If you've saved your pack, restarted the launcher, and the new data isn't visible in the launcher.  Try resaving the pack on the platform and restarting the launcher again.  This generally fixes the issue, and we will be implementing a possible fix this week.

4.301 was released some time ago, but here are the release notes for that version.

And Much, Much More!

Visit us on IRC, reddit, and our official forums and tell us what the Summer of Technic means to you!

hanakocz 7 years ago
i already know what one of the mods in the new SECRET pack is. THAUMCRAFT! ;D
Reply

Ottodot15 7 years ago
btw, i didnt hack in order to find this out. i just tried downloading the new pak. :p
Posted by Ottodot15 7 years ago
Yay! I've been searching everywhere for a pack that contains Thaumcraft.
Posted by Aqualung 7 years ago
I hope u technic ppl keep ur word about awsomeness galore! cuz i'm expecting a fully awesome and godly update of epicness and TOTAL MAGESTICNESS! i want this new update to to make me want to stay indoors on this computer for the rest of my life. :D
Reply

dogdude311 7 years ago
June has ended and did not see New Mods Packs any, but I hope to be Mods Packs Hexxit . . . please, faster
Reply

MrHsony21 7 years ago
ikr
Posted by supercooper888 7 years ago
It has been nearly 3 days since June ended. Not only have no new packs come... But nothing has been said. I understand a lot of work goes into making a pack. But you could at least update us. You stay silent for so long then you get our hopes so high than go silent again. That is why I prefer FTB. They give us so many modpacks and so much news. Your modpacks are Superior but they don't last. You stop updating them and the time it takes to release a new one is at least 5x longer than FTB. I can understand you guys are going through some trouble with moving and stuff. But keeping us in the dark? It can't be that hard to post an update. I have checked your facebook and twitter and they are as dry as it is here for info. You have promised new packs but so far we have gotten silence and have lost a pack (for good reasons). At least keep us up-to-date.
Reply

killerdean13 7 years ago
Looks like I will have a huge amount of fun playing this summer!!! I still dint know why my launcher wont successfully launch any mod packs
Reply

DwarfGod47 7 years ago
If you come to IRC we can probably help you, but we are'nt always around so the best thing to do is to ask your question and then do something else for a little bit. You could also try reddit or the forums.
Posted by CanVox 7 years ago
i'm having problems DOWNLODNG mods...
Posted by Ottodot15 7 years ago
im soooo glad to find out thats there gonna be a hexxit II because not to be mean hexxit was boring after some time playing it im so happy and cant wait.
Reply

theFailgamer 7 years ago
Excellent! Now maybe the "Trending Modpacks" in the launcher won't be (as they often are now) troll packs, and maybe the gift card spam will stop. Welcome Zehn, and WELCOME TO FLORIDA! Kinda hoping you are in the Tampa Bay area - if only so I can say I live near Technic hah :)
Reply

JustSomeChick 7 years ago
dont tell ppl where u live. there a lot of creeps out on da internet. Thats just bad stuff.
Posted by Ottodot15 7 years ago
oh no! now they know you live in tampa bay! thats really narrowed down your location!
Posted by gunhammer5000 7 years ago
Hah considering the Tampa Bay area covers a hundred miles north south and east of actual Tampa, it's a large window of "where" to find me. There's this thing in central florida where near is anything nuder 200 miles away lol
Posted by JustSomeChick 7 years ago
woop! my 3 fav modpacks being put together :). Thx Technic ~Archer
Reply

trollboy5 7 years ago
Wow... This summer is going to be Technically Amazing!
Reply

keyboardkitten 7 years ago
why did hexxit wont let you teleport?
Reply

NeonPandaXD 7 years ago
this is gonna be fun
Reply

deary101 7 years ago
ALL ABOARD THE VOLTZ HYPE TRAIN!!!!!! its been about a year since it last updated!
Reply

gunhammer5000 7 years ago
Is there any ideas for updating b-team? I'd really love to see the new galacticraft implemented into it.
Reply

ItsSurelyWaffle 7 years ago
Is there any ideas for updating b-team? I'd really love to see the new galacticraft implemented into it.
Reply

ItsSurelyWaffle 7 years ago
you guys should make it so u can have one mode pack or customize it so u can put other mods together. You can post it or not post it/ share like the mallisis doors mod is a signal mod.
Reply

Light_n_shadow 7 years ago
sweet gonna be so awesome!
Reply

Sgt. zomboss 7 years ago
I am very much looking forward to
Reply

man_touaimc 7 years ago
I'm really, really looking forward to a new version of Tekkit. That was my first real experience with modded Minecraft, and as such it's always been a bit special for me.
Reply

JayReallyPlays 7 years ago
I'm really, really looking forward to a new version of Tekkit. That was my first real experience with modded Minecraft, and as such it's always been a bit special for me.
Reply

JayReallyPlays 7 years ago
I'm really, really looking forward to a new version of Tekkit. That was my first real experience with modded Minecraft, and as such it's always been a bit special for me.
Reply

JayReallyPlays 7 years ago
I'm really looking forward to a nice big updated version of Tekkit. It's always going to be special to me, because it was my first exposure to modded Minecraft.
Reply

JayReallyPlays 7 years ago
could you please make it where you can copy a link from the website into the launcher and if you already can plz tell me how i am trying to download thediamonddimensions modpack made by dantdm and i cant find it on the launcher thanks ;)
Reply

caroline_04 7 years ago
Press Ctrl+V, then you can paste the url.
Posted by MarioAndWeegee3 7 years ago
My body is ready for new packs!
Reply