We're waiting on a lot of art that we need to be able to finish the first two packs of the summer.  They'll be out just as soon as we can put them out, we're so sorry that everything's been delayed!

Want to See Something Cool? 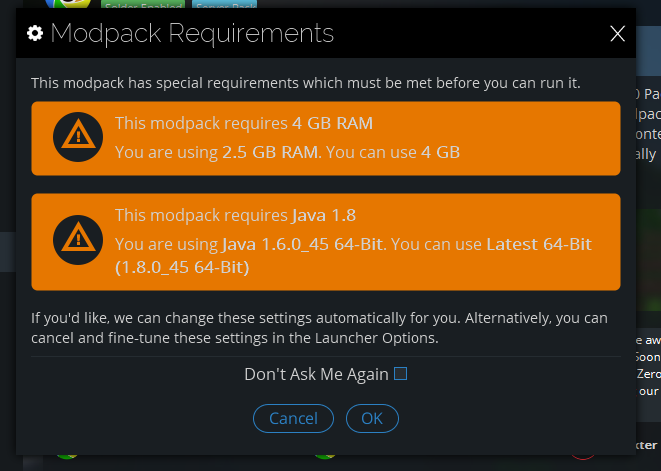 We added the ability for modpack authors to set RAM and Java version requirements for their packs!  If you're a modpack author who requires Java 1.8 or more than 1GB RAM, you no doubt get a lot of grumpy users sending you crash logs (or more likely, angry messages without logs).  Well, no longer!  If you specify RAM and Java requirements for your pack, the launcher will guide the user toward what they have to do to run your pack, even if that means intalling a new version of java.  So how do you specify requirements for your pack?

If you have a recent version of Solder, you've already been able to specify requirements, they just didn't do anything before.  Edit a modpack build in Solder to be given the option to specify a minimum RAM and Java version.  Easy!

Method 2: Don't Have Solder, or Have An Older Version of Solder

If you don't have Solder, have no fear!  You can manually add a file to your modpack that specifies RAM and Java requirements.  Add a file called runData (not runData.txt or runData.dat, just runData) to  your bin folder, next to your modpack.jar.  The inside of the file looks like this:

Instead of 1.6, put whatever version of Java your pack requires.  Instead of 1024, put the minimum MB of RAM your modpack requires (remember, 1GB is 1024MB!)  Once your users get that file, their launchers will understand your pack's requirements and enforce them for you!

A Big Week for the Platform

If you haven't noticed yet, both stats in the launcher and the dashboard feed are back.  The site is also far more performant than it has been in the past.  This is due to a lot of hard work on sct's part, to bring the platform back from the brink.  A lot of big changes have been made over the past two weeks, and it's just like night and day.  We're even planning on re-adding some features that we removed before the platform launch, such as the ability to like feed items from the feed page!  We hope you enjoy the vastly-improved performance.

This week might seem a bit boring, since you're waiting for new packs, but these improvements are only possible because some of us have finished our work on the Summer of Technic packs and are transitioning back to normal site operations.  It can be tough to see all this work while you're waiting, but this is actually great news for the upcoming packs, so take some time to enjoy these great quality of life improvements and try out some of our trending packs!  It's easier than ever now that RAM and Java requirements are handled for you!

Join us on reddit, the forums, or IRC and tell us how you're filling the hours!

You must be logged in to comment. Click here to register a new account or log in.
So for anybody who simply do not want to have to deal with RAM gating there is a simple fix to this, simply search your /modpacks/xxx for the RunData file and open with notebook or the like, you should see this {"java":"1.6","memory":"1024"} or similar, simply change the number (in this case 1024) to 0 making it look read as follows: {"java":"1.6","memory":"0"} which should allow you to bypass it easily.
Reply

DarkMetaknight 7 years ago
Go to %appdata% - roaming - .technic - modpacks - (A mod pack that you want to change) - bin then run "runData" with notepad or something. Change the memory value to 0
Posted by lkk6057 7 years ago
It's okay. We know that the longer it take's to make the pack the better it's gonna be. So just take your time...but not too long.
Reply

Ameliawrites 7 years ago
hi
Posted by jimmys17 7 years ago
question why when i open any mod pack past 1.5 in the techniclancher even vanilla on my new computer it crashes nothing opens nothing happens
Reply

FlatronEZ 7 years ago
ok (I am french)
Reply

Guilhem31790 7 years ago
the 2.5 and 3 gigs of memory option wont show up for me, and I know I have more than enough with 8 gigs of ram and 3 gigs in my video card.
Reply

SUPERbrine369 7 years ago
Get 64-bit Java.
Posted by Melfice 7 years ago
is this : http://i.imgur.com/yzUu3PA.png what is supposed to show up? im not sure...
Reply

awalkingdolphin 7 years ago
please help me :( im using java7, because java8 breaks minecraft and technic, i tried to download java7 64 bit, but it breaks too :( http://i.hizliresim.com/7k9Qyr.png
Reply

OkamiBuredo 7 years ago
lol no worries. Even though they said late June for Blightfall II, it's not gonna be extremely long.
Posted by SomeWeirdo 7 years ago
Is there anyway to make sure people use Java 1.7.0_67 64-Bit and not 1.7.0_67 32-Bit?
Reply

Green_Fox 7 years ago
I can see this "modpack requirements" thing pissing people off in the near future... Someone has a favorite modpack they play, and then an update ruins it completely with the "Modpack Requirements". That new option is going to go down hill fast...i need to keep my Java 7 32bit and 64bit, or a lot of my shit will break instantly. The GBs update though is genius, but some of us need even more than that. My max RAM i can use is the 3.5 GBs from the update, i can't get any RAM higher than that with my Java 7 64bit. Add a 4GBs, 4.5GBs, 5GBs, 5.5GBs and 6GBs option!!!
Reply

Meepologist 7 years ago
EPIC bro's! Now a few more things I'd like to suggest: *64bit and 32bit checks *If java requirements are not met for the modpack, a link to the Oracle download page be offered. *Potential OS checks? I've had a few modpacks refuse to function on Mac simply because jvm 1.6 was the max version. *Detailed instructions how to implement!
Reply

stonerhino 7 years ago
would it be possible to implement an option to edit the permgensize in the java args?
Reply

profjb 7 years ago
my stuff is gone if i log in its all gone :(
Reply

kiki6310 7 years ago
If I don't have solder, and want to set the ram/Java requirements, how would I create the runData file?
Reply

Minekrafter51 Official 7 years ago
Um... the max memory option available to me in my launcher is 1GB. I don't know code, so... Help?
Reply

TNT_Minecraft 7 years ago
can i get help. all the new packs say i need the 1.0.8 version or something and i can't figure out how to get it!!! help???
Reply

Skeletonzombie7 7 years ago
Dude, just follow what it says to do. I assume you are using an outdated version of Java/have too little ram allocated. Do a quick youtube search on "on how upgrade java" or "how to use more ram" to figure it out. If it is something more in depth than this, try posting a picture of the problem.
Posted by Racer Delux 7 years ago
You are now a month late. No new information has come. I now know that technic is sinking into a hole. They make promises they cant keep and then wont say anything.
Reply

killerdean13 7 years ago
Maybe we should start a strike?
Posted by Super_Monkey_Dog 7 years ago